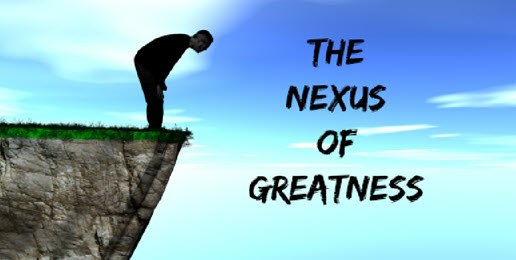 The Nexus of Greatness

I feel as if I’m standing on a precipice of personality, and we shall call it the Nexus of Greatness.

I seem to have inhabited that square of the space-time continuum sandwiched between what might end up being the historical dividing line of human personality.  Two eras represented ideologically by every two sequential generations throughout history: the chasers of greatness, and those who quit the chase.

Growing up, I was told it was possible to be great– it was important to be great– it was good to be great.  I was taught that greatness wasn’t a made-up attribute, conferred by those who write history books on those who were the palest or the male-est or the most in-the-right-place-at-the-right-time.  I was taught names, of actual people, historical people who actually existed– or whom, at least I was taught, actually existed– and were the Prime Movers, the doers, the ones who accomplished things.  And that those accomplished truly mattered.

But then they started teaching us that all that was a lie– that no great men and women really existed, that greatness was an anonymous attribute owned by the masses who had provided the shoulders for those few-remembered names to stand on.  Or worse, that that greatness we were taught about, had been bullshit all along– that no single achievement trumps any other– that all discoveries, works of art, technological innovations, and intellectual achievements, were really the same, and could not be judged as one being more impressive than another.

Later yet (first mumbled in shame, next screamed openly and brazenly), I was taught that greatness didn’t matter anyways– that greatness, after all, was in the eye of the beholder, a sheer construct of the mind; that it was what the reader of the story defined it to be, with no reference to the external world, or a standard.  Frightening enough when the standard was adult fairy-tale nonsense, like God or “the State”; far scarier when the standard ceased to exist entirely– and people didn’t even attempt to justify their decisions with reference to facts they no longer chose to believe in.

“Whose facts?”, their petulant hipster mouths would whine.   “Whose reality?”

So far, they are mostly correct– when the standard of the real world has been moved from the realm of fact, to the realm of society– from cold, hard things that don’t bend when you walk into them, to untold quantities of “likes” and “follows” and whatever other electronic measure of worth has been dropped in your water supply this week.

But the problem is: I stand on the nexus of greatness– or perhaps of what once was.

On the one side, the new breed– that generation my peers seem to refer to as “Millennials”, I don’t know– in essence, that group that has accepted to its core that there is no ranking, no external standard whatsoever, and that it’s all the same, there is no greatness– for a determinant of greatness would require admission and full acceptance of an external world, one with rules that trumps one’s own fleeting whims and emotionalism– perhaps not God, but let’s call it “logic”: that guiding hand of the universe that shows that there ARE, in fact, rules– science, cause and effect, identity– and success is NOT always a matter of Photoshopping away flaws, or collecting enough followers to prove one’s importance.

And on the other side, the old guard– those of us who still cling to some past notion of greatness, but a greatness that was more than “made up for the moment”– one that usually came as the end result of applied effort over time: a task, a skill, a sport or instrument, or perhaps simply the ability to read a book– climb a tree– drive with competence, and look people in the eye when speaking.

That old guard, of which I feel I’m one, unfortunately still clings to that belief in greatness– and perhaps more unfortunately, still strives to be it, to feel it, to live it.  At least on occasion.

But in a world that seems careening on a breakneck path to negation by approximation and mediocritization– boiling the bright spark away until all flavor and essence has been dulled down into a shit-gray gruel of tasteless mindless meaningless morons, all hitting that electronic box in front of them, while not seeing the world pass by in peripheral view of the glow—

They are winning.  They didn’t want to play in our world, because it was hard.  It was a lot of work.  You sometimes got scratches, and cuts, and blisters.  Had to sweat once in a while.  Got picked on, maybe, even had your feelings hurt.  The latter isn’t a necessity in that real world– but often accompanies those cold, hard facts.
They didn’t want to play in that world of rules and laws– and so, instead invented a new one, where the only rules and laws are those programmed in by the designer.  Logic, book-ended by religion and social media: the two reigning false idols of mankind’s history to date.
So I stand here on this precipice, staring back, searching– trying to keep in sight that nexus of greatness– when it mattered, to work, to fail, to bleed– as I feel myself being slowly carried off into the electronic ether, with warm feelings of simplicity– and ease– now putting my need for greatness, to sleep.
-David A. Johnston
11/2/17
40
SHARES
ShareTweet